Return to Watering the Sun Corridor 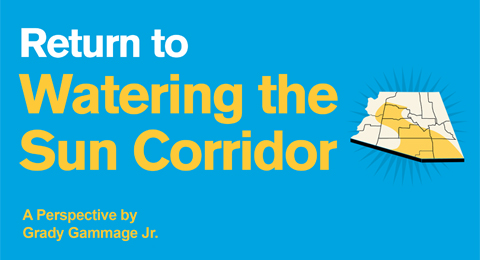 A lot has flowed under the bridge since the Morrison Institute issued Watering the Sun Corridor in August of 2011. That report was an attempt to explain to a general audience how the water systems of urban Arizona work, and how those systems could support a large population. At that time, thinking about the spine of cities stretching from Prescott, through Phoenix and Tucson, to Nogales represented a relatively new geographic definition.

Watering the Sun Corridor addressed the understandable concern that urban Arizona might be “running out” of water. The report quantified and aggregated the water inputs available to the geography and sought to balance those inputs against demand and anticipated population growth. The conclusion then was that even in the face of climate change, the water supply for the Sun Corridor was relatively robust and could support continued future growth. In order to keep growing, however, the report suggested that tough choices would be necessary about the nature of our desert lifestyle, issues of urban form, landscaping, the natural environment and the role of agriculture.

Ten years later, land use attorney Grady Gammage Jr. reflects back on Watering in this new piece sharing his perspective about water supply and demand in the Sun Corridor.