Growth on the Coconino Plateau: Potential Impacts of a Water Pipeline for the Region 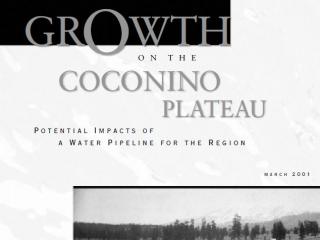 Morrison Institute for Public Policy was asked by the Arizona Department of Water Resources to study potential growth impacts of a proposed new water pipeline for the Coconino Plateau Watershed in north-central Arizona, an area that is projected to nearly double in population over the next 50 years. The area of study extends from Page and Grand Canyon in the north, to Flagstaff and Williams in the south. It includes three cities, portions of two Indian reservations, one national park, two nationals forests, and roughly 1.5 million acres of mixed private and state lands primarily arranged in an alternating, one-square mile checkerboard pattern. The great majority of residents in the region currently rely on groundwater to meet their water needs.