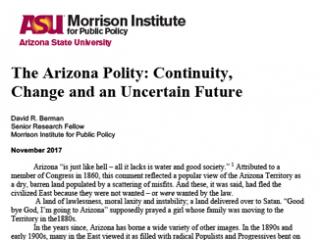 This paper seeks to go beyond images and impressions to draw upon theories about Arizona’s political culture and the forces that appear to drive politics and policy making. The concern is not so much with what has been unique about Arizona, but with the important values, beliefs and behavioral patterns that have been reflected in its political life over the years. Political culture helps account for continuity in the life of a polity. It reflects the basic idea that “governments, even revolutionary ones, do not spring full-grown from the air like rabbits from a magician’s hat. On the contrary, every government has a past that goes far to explain its present and to set bounds of probability to its future development.”