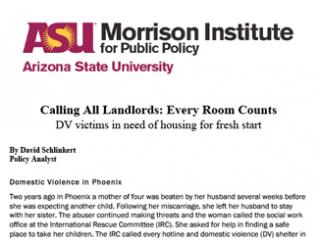 Arizona is in critical need of emergency and affordable housing for domestic violence victims. Our state ranks eighth nationally for the number of calls to the National Domestic Violence Hotline and 41 percent of those calls are from Phoenix. Approximately 15 percent, or 4,953 individuals, who entered into homeless shelters in Arizona in 2014 did so because of DV,  This briefing looks at ways more abuse victims can find safe homes via incentives and other programs for landlords.