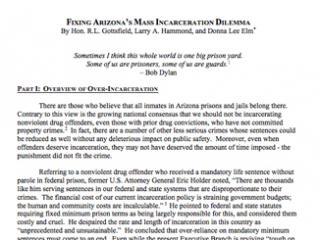 The 2015 State of Our State Conference focused on criminal justice reform and included several white papers from various authors, researchers and legal officials from different perspectives. Here is the latest contribution in the series published by Morrison Institute for Public Policy as part of its ongoing effort to encourage public dialogue on criminal justice issues.

America is witnessing a growing national consensus that we should not be incarcerating nonviolent drug offenders, even those with prior drug convictions, who have not committed property crimes. Many other less-serious offenders could receive reduced sentences without threatening public safety. Even when offenders deserve incarceration, they may not have deserved the amount of time imposed – the punishment did not fit the crime.

Touching on all aspects of the justice system, the authors assert that Arizona is behind the curve in addressing its mass incarceration problem. The importance of ignoring the direction the country is going cannot be understated for Arizona, which has one of the highest incarceration rates. It is even more unjustified in light of research indicating that shorter sentences do not jeopardize public safety – with safety being the mainstay basis for Arizona’s heavy sentencing regime.