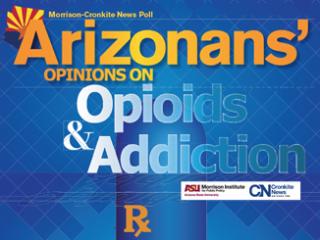 The prevalence of prescription opioid abuse and addiction in Arizona is widespread, according to a major statewide poll released by Arizona State University today.

The Morrison-Cronkite News Poll: Arizonans' Opinions on Opioids and Addiction found four in 10 Arizona adults (41.8 percent) know someone who has been addicted to prescription painkillers. The poll's margin of error was plus or minus 3.5 percentage points.

The poll - a joint project between ASU's Morrison Institute for Public Policy and Cronkite News, the news division of Arizona PBS - showed one in seven Arizona adults (14.4 percent) personally knows someone who has died from a prescription painkiller overdose. According to the Centers for Disease Control and Prevention, 78 people die every day from opioid-related overdoses in the U.S.

"Our polls continue to add key insight and data on important and complex issues facing the state and nation including in this case, opioid availability, abuse and addiction," said Thom Reilly, director of Morrison Institute for Public Policy. "The findings show how widespread this epidemic manifests itself across a variety and multiple demographics. Poll results should help policymakers, medical professionals, community groups and the public better address this serious problem through improved awareness, policies and practices."