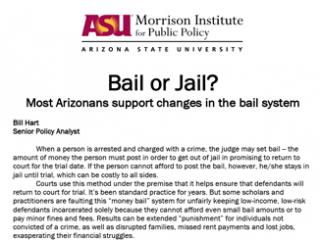 If a person cannot afford to post bail, he/she stays in jail until trial, which can be costly to all sides.

Courts use this method under the premise that it helps ensure that defendants will return to court for trial. It’s been standard practice for years. But some scholars and practitioners are faulting this “money bail” system for unfairly keeping low-income, low-risk defendants incarcerated solely because they cannot afford even small bail amounts or to pay minor fines and fees.

The Arizona Supreme Court’s Task Force on Fair Justice for All was formed last year and calls for fundamental changes to the traditional system of determining pretrial release or detention. The changes, they say, are rooted in evidence-based practices that more reliably assess suspects’ likely behavior while preserving or enhancing public safety.