Building and Rebuilding An Election System in Arizona: Where We've Been, Where We're Going 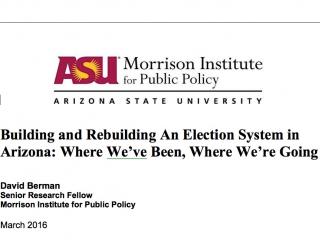 In the wake of the 2016 Presidential Preference Election primary, where voters in Maricopa County stood in line for hours in many cases to cast a ballot in already-decided races and for independents provencial ballots that wouldn't count anyway, Arizonans continue to seek to have a larger and direct voice in government. In Building and Rebuilding An Election System in Arizona: Where We've Been, Where We're Going, Morrison Institute Senior Research Fellow David Berman examines Arizona's historical, recent and ongoing pursuit of "a new kind of politics" via everything from election reform to term limits to ballot propositions.