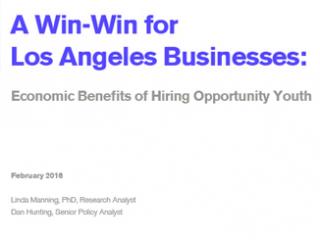 There are nearly 214,000 people between the ages of 16 and 24 in metropolitan Los Angeles who are neither working nor in school. These “Opportunity Youth” (OY) present a staggering challenge to the area in terms of lost wages and burden of social services alone. The number of OY has decreased steadily since the end of the recession. However, in 2014, OY were more White, more educated, more likely to speak English in the home and more likely be on food stamps than in previous years. This demographic shift implicates a larger portion of those who are not traditionally considered “at risk”; a group that has historically not received much support.