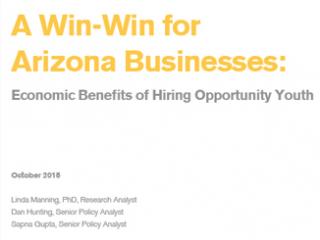 Over 92,000 people between the ages of 16 and 24 in metro Phoenix who are neither working nor in school present a staggering challenge to the area. These Opportunity Youth (OY) have a lifetime taxpayer burden of $27.3 billion and a lifetime social burden of $218.5 billion. Nationally, the 6.7 million Opportunity Youth have a potential taxpayer burden of $1.56 trillion and an aggregate social burden of $4.75 trillion. Figures like this signal a clear call to action.


National and local businesses, along with leading academic institutions have the opportunity to emerge as leaders in decreasing the taxpayer and social costs of OY while simultaneously helping their own bottom line. The opportunity of a collaboration between leading business and leading academic institutions on the issue of OY creates a win-win for the national and state economy as well as the welfare of all citizens.