$9.1 billion state budget is all about speed, cuts 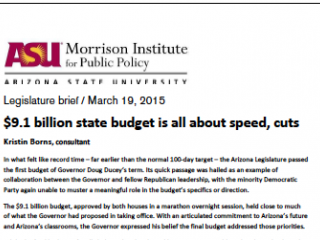 This March 19, 2015 review of Arizona's state budget looks at the balancing act between fiscal responsibility and social investment in education and other public programs:

In what felt like record time – far earlier than the normal 100-day target – the Arizona Legislature passed the first budget of Governor Doug Ducey’s term. Its quick passage was hailed as an example of collaboration between the Governor and fellow Republican leadership, with the minority Democratic Party again unable to muster a meaningful role in the budget’s specifics or direction.

The $9.1 billion budget, approved by both houses in a marathon overnight session, held close to much of what the Governor had proposed in taking office.