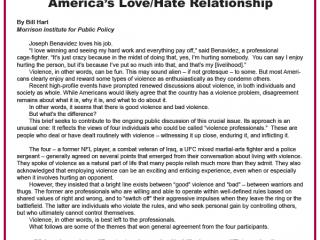 March 6, 2015 / This brief is based on a public panel discussion that was held January 29, 2015 in Phoenix. It was sponsored by Morrison Institute for Public Policy at Arizona State University, the Arizona Foundation for Women, and the Arizona Coalition to End Sexual and Domestic Violence. The moderators were Morrison Institute Senior Policy Analyst Bill Hart and Sara Presler, CEO of the Arizona Foundation for Women. The text has been edited for length and clarity.