The Future of ‘Direct Democracy’ in Arizona: Petition Circulators, Election Officials and the Law 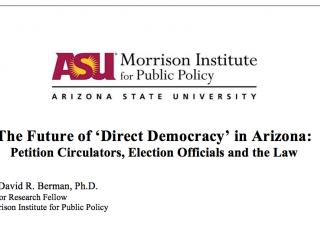 The Legislature continues to grapple with election reform and strike a balance of how much binding authority should remain in the hands of voters in terms of initiative, referendum and recall, but Arizona’s penchant for people power has been demonstrated since before statehood. In the midst of his campaign for Congress in 1911, for example, Arizona’s Carl Hayden noted that everywhere he went he found voters eager to take control. "The people want their own kind of government,” Hayden told reporters. “They want to be the dictators.”