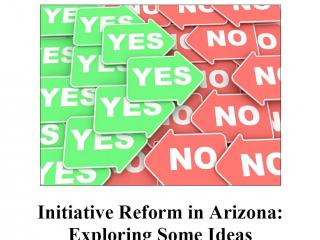 Reports and Publications
May 2013
David Berman

Since statehood in 1912, Arizona has been among the nation’s leaders in using the initiative process to either adopt a statute or amend the state constitution by placing a measure on the ballot. But such efforts are anything but easy. In fact, organizers have found it to be an expensive, time-consuming and exhausting process – and one that is unlikely to end successfully. This briefing looks at the initiative process in Arizona since statehood in 1912, including its success/failure rate and proposals for reform.