To Learn and Earn: Arizonans’ Experiences Competing in the Race for Good Jobs 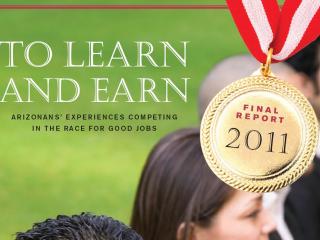 Nearly two years ago, the Arizona Minority Education Policy Analysis Center (AMEPAC) launched an effort to re-examine Arizona’s educational achievement and economic prospects for the 21st century. Phase I of this research, titled To Learn and Earn: Arizona’s Unfinished Business in Human Capital, was published in March 2009. The report noted the ample evidence that economic growth is now based on ideas and innovation, that science and technology are driving global economic changes and that the national and international competition is fierce.