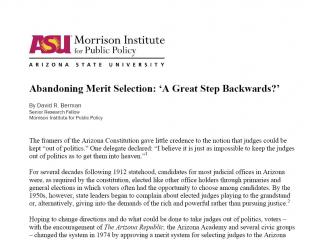 This briefing examines the past, present and potentially future ways judges in Arizona are selected/elected. There are a number of bills looking to make both small and major modifications to Arizona’s judicial system. Potential changes include adding public comment and rulings information to pamphlets created for judicial selection, increasing the number of Supreme Court justices to seven and restricting the Supreme Court’s authority. There are also a handful of bills that would directly impact merit selection if they were successful this session.