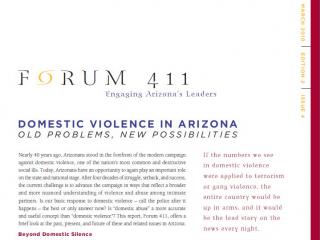 The latest installment of Morrison Institute for Public Policy's Forum 411 series focuses on one of society's longstanding problems: domestic violence. “Domestic Violence in Arizona: Old Problems, New Possibilities” offers a brief look at the past, present, and future of domestic violence-related issues in Arizona...Nearly 40 years ago, Arizonans stood in the forefront of the modern campaign against domestic violence, one of the nation’s most common and destructive social ills. Today, Arizonans have an opportunity to again play an important role on the state and national stage. After four decades of struggle, setback, and success, the current challenge is to advance the campaign in ways that reflect a broader and more nuanced understanding of violence and abuse among intimate partners.