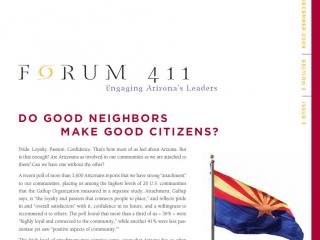 This seventh issue of the Forum 411 series looks at citizen involvement as it pertains to community attachment, and why they are not the same. This high level of attachment may surprise some, given that Arizona has so often been portrayed as a place of low civic engagement – an outpost of isolated residents who prefer to disappear behind their garage doors and not busy themselves with their community’s wider welfare (see sidebar on page 3). That is, we like where we live, but aren’t inclined to do much about it. The findings in The Arizona We Want, a report by the Center for the Future of Arizona, point to another reality, and thus raise some intriguing questions.