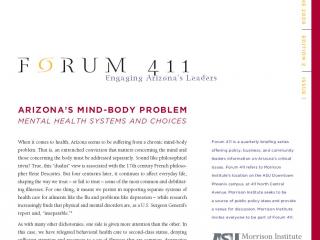 Some of Arizonans’ most common and destructive illnesses —those of the brain— are failing to receive adequate treatment due to a combination of modern governmental gridlock and a centuries-old philosophy that separates the mind from the body.

Arizona’s Mind-Body Problem: Mental Health Systems and Choices, the fifth issue in the Forum 411 policy briefing series, looks at how the artificial mind-body division affects all Arizonans—the majority who rely on private health insurance as well as some of the state’s sickest and most vulnerable adults and children who are treated in a public mental health system that has been criticized as underfunded, understaffed, and highly uneven in its quality of care.

As Arizona continues to wrestle with integrating mental health with physical health, it’s failing to adequately treat some of the most debilitating illnesses, such as schizophrenia, bipolar disorder, or major depression. With behavioral health relegated to second-class status in Arizona, the system is denying attention and resources to a set of illnesses that are quite common and highly destructive to individuals and families — yet almost always treatable.