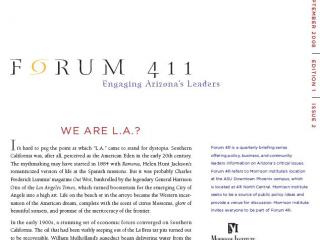 The Phoenix/L.A. conceit is deep-seated, chronic, and nearly always offered as something to avoid. Phoenix, a city often accused of having no identity, certainly has long known what it doesn't want to be. What is it we are so afraid of? All big cities have mixed images, but the über-negative view of Los Angeles is grounded in three attributes – smog, congestion, and sprawl. These problems and the comparisons between Phoenix and L.A. are examined in the second issue of Forum 411.