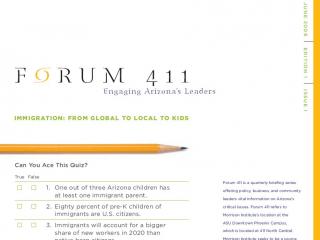 "Immigration: From Global to Local to Kids" is the first issue of the policy briefing series, Forum 411: Engaging Arizona's Leaders. Migration is a global phenomenon today, putting the United States in the midst of another historic wave of immigration. As a "gateway" and a destination, Arizona is certainly not alone in coping with people crossing borders.

One out of three Arizona children has at least one immigrant parent, and almost 80% of these youngsters are U.S. citizens. Together, young immigrants and children of immigrants comprise "Generation Global," or "Gen G," the thousands of children with global ties who will help shape Arizona's economy. But while most Arizonans see immigration as a critical issue, little attention has been focused on Gen G and the opportunities and challenges they present to Arizona, yet immigration is as much about parents and children as it is about employers and workers.

The briefing describes immigration as a global, national, local, and family phenomenon and asks "Is Arizona ready to make the most of Gen G?"