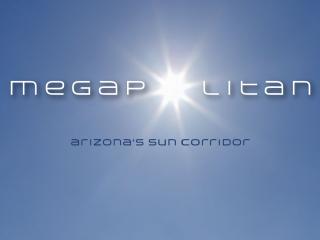 Megapolitan offers a bold new picture of Arizona’s geography and its future opportunities and “megaton” challenges. This report presents a scenario for 2035 based on current trends. It analyzes the Sun Corridor and provides insights into the region’s global potential, water, governance, sustainability, and “trillion dollar questions.” It discusses the “tragedy of the sunshine” and asks the indispensable question: In 2035, do you want to live in the Sun Corridor?

“The megapolitan concept is more than just two cities’ suburbs spilling across each others borders. It’s a combination of land use, commerce, and transportation planning that looks at vast areas as single entities.”
'When Phoenix, Tucson Merge,' Arizona Republic, 4/9/2006

Arizona is one of the nation’s most urban states, and now it includes one of 20 “megapolitan” areas in the U.S. People have predicted for 50 years that Phoenix and Tucson would grow together into a giant desert conglomerate. That possibility has been seen as exciting, intriguing, and distressing. While a solid city along Interstate 10 is unlikely given the diverse land ownership in central and southern Arizona, the two metro economies are already merging.

Megapolitan: Arizona’s Sun Corridor, one of the first reports on a single megapolitan area, recognizes a more sophisticated technique for analyzing urban growth—that shared economic and quality of life interests are more important than physically growing together.

Scholars at Virginia Tech defined the megapolitans based on economic and growth patterns.
The Sun Corridor, which cuts across six counties from the border with Mexico to the center of Yavapai County, is the home of eight out of 10 Arizonans. In the next several decades, two out of three Americans will live in a megapolitan accounting for 60% of the population on only 10% of U.S. land.