Confidence and Caution: Arizonans' Trust in the Police 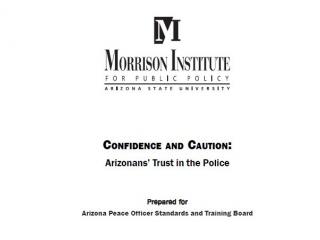 National surveys, as well as an Arizona poll commissioned for this report, indicate that most Americans do trust police. But a closer examination of the relationship between police and public finds it to be remarkably complex, resting as it does on a fundamental ambivalence that both sides bring to it. Police, on one hand, are sworn to “serve and protect” the public, but in doing so regularly must discipline and compel some of them. The public, on the other hand, must obey officers and rely on them; but many also acknowledge that they sometimes resent and even fear the police.

This report addresses the issue of trust in police in three ways: