The Treasure of the Superstitions 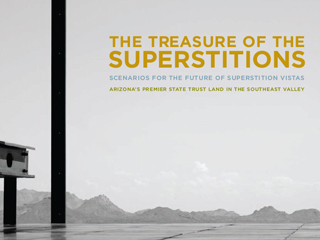 State Trust Lands are among the greatest public assets in Arizona’s portfolio. Set aside at statehood, the Arizona State Land Department manages more than 9 million acres of trust lands on behalf of 14  beneficiaries. The largest of which by far is Arizona Public Education K-12. The mission of the Land Department is to maximize revenues from these trust lands. In FY 2005, state trust lands generated $115 million for all beneficiaries, of which $101 million was designated to support public K-12 schools. These amounts are increasing rapidly as more state trust land becomes attractive for development in Arizona’s urban areas.

The parcel discussed in this report, “Superstition Vistas,” stands out as the jewel among Arizona’s trust lands. Not only is it situated in the path of metro Phoenix growth, but it also borders thousands of acres of public land managed by the Tonto National Forest and U.S. Bureau of Land Management.

Estimates of its total value run well into the billions of dollars.

With so much at stake, we at the Land Department sincerely appreciate Morrison Institute for Public Policy’s research, and the ideas and vision of all who have contributed to this thoughtful discussion regarding the future of the Superstition Vistas property.

The Treasure of the Superstitions sets the stage for a continuing dialogue about the potential for Superstition Vistas, and indeed, all of Arizona’s trust lands.

We look forward to listening to and working with our beneficiaries, citizens, counties, municipalities, real estate businesses, and other interested parties to make the most of Arizona’s “treasure.”