Why Some Schools With Latino Children Beat the Odds... And Others Don't 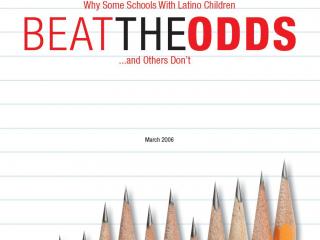 It’s true that, throughout Arizona and the Southwest, the odds are against high achievement in schools with a mostly Latino, mostly poor student enrollment. And, indeed, most schools with such demographics do have a hard time. But some such schools --beat the odds-- and achieve consistently high results or show steady gains. Why do these schools succeed where others fail? What is the DNA of a successful -beat-the-odds-- school? And can the components of success be replicated elsewhere, in schools which so far have fallen victim to the odds? Using the inspiration --and the methodology-- of business guru, Jim Collins, author of the best-selling book, Good to Great: Why Some Companies Make the Leap ... and Others Don’t, we found 12 elementary and middle schools in Arizona – schools whose students are mostly Latino and mostly poor -- that are "beating the odds" on reading and math scores. And, as Collins did with successful companies, we compared them with similar schools -- also with students who are mostly Latino and poor, sometimes even in the same school district -- that are performing poorly.