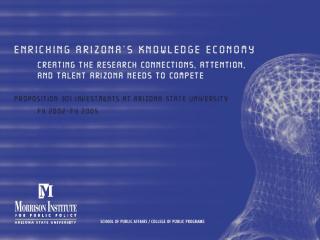 Numerous studies have concluded that university science and technology research can lead to economic growth, particularly in the fast growing and high paying knowledge economy industries. Across the country and around the world, many state and national governments have heeded these studies and made substantial investments in their university research capacity. The common hope is to capitalize on the wealth and job creation that can be generated by a science and technology-based economy. Arizona is among the biggest recent investors. Passage of Arizona’s Proposition 301 in November 2000 earmarked an estimated $1 billion over 20 years to support increasing science and technology research capacity at the state’s three public universities. Other research funding programs have also been initiated in the state. Now, after the first four years of Proposition 301 funding -- FY 2002 through FY 2005 -- the question arises: How are Arizona’s Proposition 301 research investments performing?