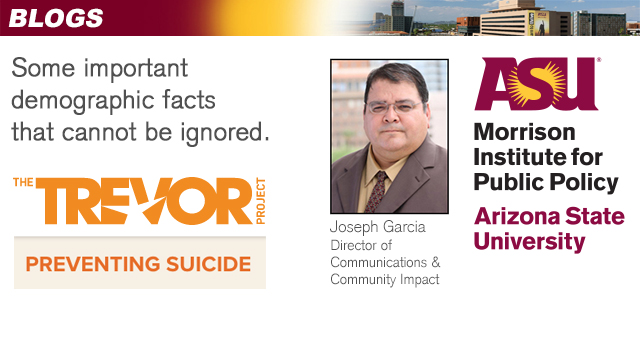 (UPDATE: The so-called "No promo homo" law was repealed on April 11 after Governor Doug Ducey signed a bipartisan bill to end the 1991 state law.)

With at least 88 Arizona youths taking their own life over the last two years, including a recent wave in the East Valley, the issue of teen suicide has been in the news lately and has garnered the attention of the Legislature.

Senate Bill 1468, which has bipartisan support in both the House and Senate, would provide training in suicide prevention for school counselors, teachers, principals and other education personnel who work with students in grades 6-12.

Also, certain occurrences in teens’ lives sometimes can act as suicidal triggers: a relationship breakup, struggles with grades, not making a team or club, bullying or feeling ostracized, poor body image, feeling misunderstood, parents’ divorce or death of a friend or family member.

Life being what it is, most if not all teens have experienced one or several of the symptoms and/or possible triggers at one time or another, making identification that much more difficult and that much more important.

But there are some important demographic facts that also cannot be ignored, including LGBTQ youth who are particularly vulnerable to suicide with unique challenges and issues.

• Suicide is the second-leading cause of death among young people ages 10 to 24.
• LGB youth seriously contemplate suicide at almost three times the rate of heterosexual youth.
• LGB youth are almost five times as likely to have attempted suicide compared to heterosexual youth.
• 40 percent of transgender adults reported having made a suicide attempt, with 92 percent of these individuals reported having attempted suicide before the age of 25.
• LGB youth who come from “highly rejecting families” are 8.4 times as likely to have attempted suicide as LGB peers who reported no or low levels of family rejection.
• Each episode of LGBT victimization, such as physical or verbal harassment or abuse, increases the likelihood of self-harming behavior by 2.5 times on average.

Why talk specifically about LGBTQ youth? Because in Arizona, teachers, counselors, educators and school personnel currently cannot. They are legally silenced.

As a recent KJZZ story pointed out, Arizona state law makes it illegal for school sexual health  education or counseling to include information that “promotes a homosexual lifestyle” or “portrays homosexuality as a positive alternative lifestyle.”

Negative reinforcement, even in the form of silence, can be a trigger in and of itself to a kid struggling in coming to terms with sexual identity, or being bullied in the hallways or on social media simply for being themselves.

In her first State of Education speech last month, Arizona Schools Superintendent Kathy Hoffman told House Education Committee that schools must create “an inclusive environment that supports children from all backgrounds” – and that includes students in the LGBTQ community (including straight kids with gay parents).

Hoffman also noted that educators must protect and help those students who are more likely to be bullied or harassed, which can trigger suicidal thoughts – and once again that includes students in the LGBTQ community, which today gets the silent treatment.

“A simple step we can take to help reduce discrimination and bullying for these students is to repeal the ‘no promo homo’ law, (which) contributes to an unsafe school environment,” Hoffman said of the state law, which also is being challenged in federal court by two civil rights groups.

Let’s be honest: Kids can be cruel; public policy should not be.

There appears to be colliding public policy here that needs to be discussed and somehow reconciled. Talking, after all, remains one of our best tools – including when discussing teen suicide prevention.