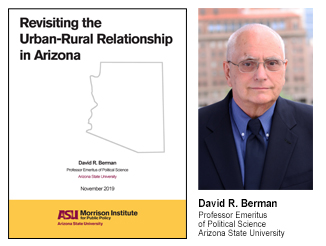 Did you know that it took a U.S. Supreme Court decision to end rural domination in the Arizona Senate and fundamentally change the locus of power in the state?

This November 2019 report by ASU Professor Emeritus of Political Science David R. Berman is based on an examination of population, voting, and governmental spending information, relevant archival and secondary sources, and a series of interviews. It focuses on developments affecting urban-rural relations, the attitudes and needs of people in rural communities, and rural influence in the political system at the state level.

This report generally compares Arizona’s two most populous counties, Maricopa and Pima, with the remaining 13 counties.