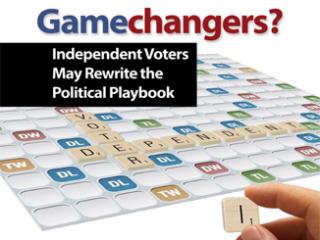 Politics, elections and governance in the United States are largely viewed through the lens of a two-party power structure of Republicans and Democrats. However, a distinct but ill-defined group of voters is quietly becoming a force that no longer can be ignored. Independent voters are increasingly determining winners and losers in election contests throughout the country and the number of Americans who call themselves independents is on the rise. However surprisingly little is known about the America’s independent voters.

Morrison Institute for Public Policy at Arizona State University and the Schwarzenegger Institute for State and Global Policy have teamed up with one another and Independentvoting.org to examine the independent voter phenomenon and the impact that it is having on the American political landscape. Their findings have been outlined in the briefing paper Gamechangers?: Independent Voters May Rewrite the Political Playbook.