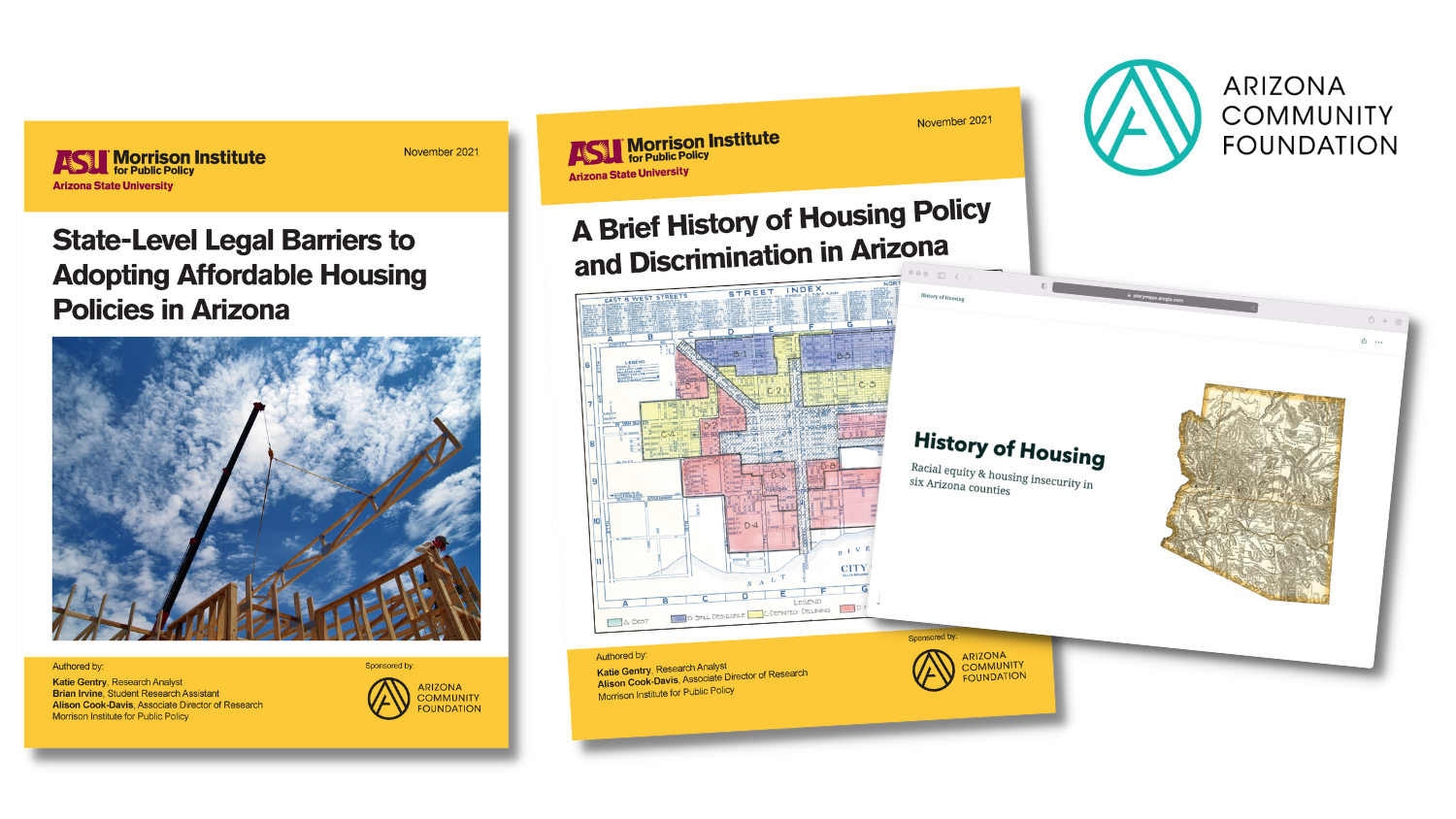 Arizona Community Foundation generously funded Morrison Institute for Public Policy to examine issues related to housing insecurity in Arizona. On this page, you will find all of the Morrison Institute research conducted as part of this project. New research will be added throughout 2021 and 2022.

Several widely used policies can increase access to and the affordability of housing. However, many of these tools are preempted or limited by Arizona law. This brief gives an overview of these policies, discusses their legality in Arizona, summarizes the pros and cons, and offers potential solutions to existing legal barriers.

Most county and municipal governments use zoning regulations to guide new development and improvements on property. Exclusionary zoning occurs when zoning laws place restrictions on what type of homes can be built in a particular area. For example, a zone designated as residential may have standards for whether a property is single-family or multifamily, the size of the lot and residence, and where on the property the residence is situated. While exclusionary zoning and development standards have been used to assist in healthy growth and prevent problematic situations — such as an industrial plant placed in the middle of a neighborhood — exclusionary zoning policies are also often barriers to the racial integration of neighborhoods. Furthermore, exclusionary zoning can prevent the development of affordable homes and increase housing costs because of issues that come with development standards, including lot size, single residence per lot requirements, and parking minimums.

Housing Discrimination and its Consequences

A Brief History of Housing Policy and Discrimination in Arizona (PDF)

The present-day factors that determine where and how one can buy a home are influenced by historical public policy choices. This brief investigates how past policy choices in the United States and Arizona have shaped the housing landscape, the current limits on homeownership, and policy solutions to overcome these challenges.

The present-day factors that determine where and how one can buy a home are influenced by historical public policy choices. Past policies encouraged white homeownership, protected white people from economic downfall, and created segregation between white people and people of color. Although some policies have tried to reverse these practices and racial integration has drastically increased, the past still weighs on the present housing landscape of Arizona. The Morrison Institute report “A Brief History of Housing and Policy Discrimination in Arizona” (link above) investigates how past policy choices in the United States and Arizona have shaped the housing landscape, the current limits on homeownership, and policy solutions to overcome these challenges. This online resource complements and expands upon this report by demonstrating how some Arizona policies and practices contributed to racial segregation in housing that is still felt today.

“Shoestring Away from Nothing”: Experiences of Housing Insecurity in Pima County (PDF)

Focus group participants said that in Pima County, there is a lack of available apartments in any price range. Tucson has a 4% vacancy rate and an average vacancy of 31 days, lower than the national average of 39 days. For every vacancy, there are 14 prospective renters.

“You Feel Like a Failure”: Experiences of Housing Insecurity in Maricopa County (PDF)

In 2021, to afford a two-bedroom apartment in the Phoenix metro area at fair market rate, a worker needed to earn $24 per hour. However, many focus group participants were being paid $13 to $15 per hour and felt stymied in their attempts to look for more lucrative careers or pursue further education.

“Where Do I Go Now?”: Experiences of Housing Insecurity in Yavapai County (PDF)

Many focus group participants noted that they were simply not making enough money to keep up with the cost of housing, especially when some must commute from neighboring cities into Sedona to work low-wage service jobs. Only 25.8% of people working in Sedona actually live in the city, and 77% of Cottonwood’s residents leave the community each day for work.

“The Gap is Widening”: Experiences of Housing Insecurity in Coconino County (PDF)

Coconino County had the highest cost of living in Arizona in late 2020, with monthly expenses of $3,611 needed to cover only basic necessities for one person. Since then, rising housing costs and inflation have further increased living costs; a living wage for a single adult with no children is $18.79 while a household of two adults with two children would need a wage of $23.71.

The lack of support for housing programs and assistance was widely felt by focus group participants, who noted that there are fewer resources available to them in Cochise County than in other areas of the state. Participants also noted that available homes were often in poor physical condition and repairs did not get fixed by landlords. Over the past 10 years, Cochise County has not seen the same level of growth in its economy in comparison to the state and other counties. While the attraction of new jobs that pay livable wages and training the workforce to fill those jobs is essential in improving the economy and infrastructure of Cochise County, building and maintaining affordable housing development is just as vital in strengthening the economy and workforce.

The City of Yuma estimates that nearly 1/3 of renter households need a rental unit that costs less than $500 per month, but only 15% of all rentals are priced in that range. Several participants compared Yuma County to other areas of Arizona, observing that while the cost of living was lower, starting wages were also lower – usually the state minimum wage of $12.80 as opposed to the starting wages of $14 or more they found in neighboring counties.

Arizona is experiencing a housing shortage that has left many residents struggling to find or maintain housing across all housing types, ranging from luxury to affordable. While many development companies and nonprofits seek to respond to the demand for housing in Arizona by building more housing, they are often challenged by issues outside of their control. To further understand the barriers developers face when building housing, we interviewed 15 housing practitioners involved in building various affordable, single-family, multifamily, and market-rate housing developments in Arizona. Developers listed zoning regulations, community pushback, and financing as the primary barriers to building housing in Arizona.