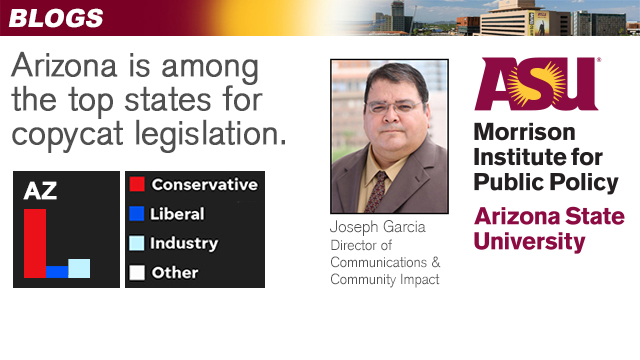 Arizona is among the top states for copycat legislation, “model” bills that are crafted on a national level by conservative, liberal and industry special-interest groups and then pushed on the local level from state Capitol to state Capitol.

“Copy, Paste, Legislate”, a two-year investigative journalism project by USA Today and The Arizona Republic, lifted the curtain on the practice by examining nearly 1 million bills in all 50 states and Congress over the past eight years, using a sophisticated computer algorithm. The Center for Public Integrity contributed with a separate detailed analysis of the data.

While the practice of “copycat legislation” is not new, researchers were struck by the sheer volume: “While the analysis found more than 10,000 copied bills, the real number is probably far higher. Our algorithm matched only identical text. A lawmaker who copied the idea behind a model bill – without using the exact words – wouldn’t be detected.”

Although the practice itself is likely to continue, such disclosure of “your-state-name-here” bills may be better cloaked in the future to defy detection.

But as it stands today, the investigation found that “Illinois, followed by Oklahoma, Arizona, Virginia and Tennessee, passed the most copied bills, more than 550 in all.” A detailed chart showed that as the No. 3 state, Arizona passed 120 of the 460 copied bills introduced.

Also detailed in the investigation: “Of the 10,000 bills state lawmakers introduced that were copies of model legislation, most were written by industry and conservative groups.” The breakdown was 4,301 by industry; 4,012 by conservative groups; 1,602 by liberal groups; and 248 by others.

The nation’s powerhouse for producing copycat legislation is the American Legislative Exchange Council, or ALEC, an industry-sponsored group founded in 1973 that targets conservative Republican elected officials.

As the chart below shows, Arizona also was among the top states – No. 2, to be exact – for copying conservative model legislation, introducing at least 209 bills from ALEC models, with 57 of the bills becoming law. Only Mississippi debated and passed more ALEC models during the time period, according to the report.

It’s important to note that there is not anything illegal about copycat bills, and there no doubt are some good reasons for passing identical laws in various states, including Arizona. But this new report offers an eye-opening look at just how many state bills are crafted and drafted wholesale nationally by partisan and special-interest groups before being introduced and in many cases being passed locally into law.

In other words, if we were comparing apples to apples, the Arizona Legislature would not exactly be a farmers market, with the origins of many bills anything but locally or organically grown. 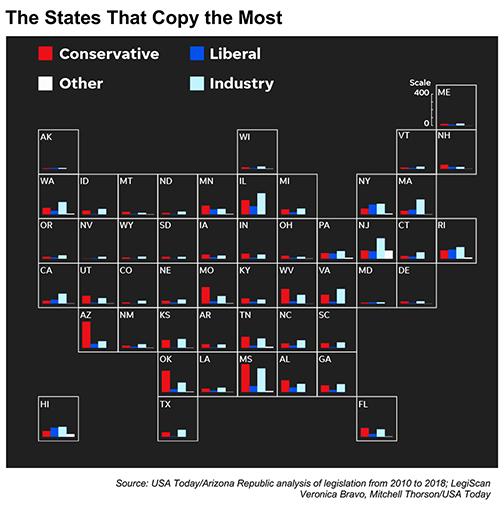