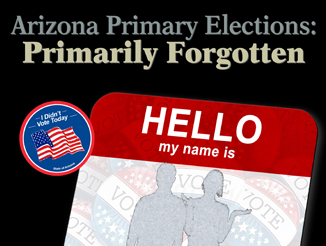 Only about one in five eligible voters cast ballots in Arizona primaries, despite the fact these races often serve as the decisive election for Congress and the Legislature. Independents, who often don't know they can participate in primaries, are dramatically unrepresented.

"The more voters that participate in a primary the broader the representation of the public," said Arizona Citizens Clean Elections Commission Executive Director Tom Collins. "The Clean Elections Act and our partnership with Morrison are helping to call attention to these important issues of voter participation."

"The voter crisis in Arizona is really underscored by the lack of citizen participation in the primary elections, especially when considering the fact many key races are determined in the primary and the general election is relegated to more of a formality," said Morrison Institute's Joseph Garcia, who along with David Daugherty co-authored report.

The Arizona's Voter Crisis report found a lackluster voter turnout in the general election, as well. While 2.6 million votes were cast in the 2016 Arizona general election, there also were 2.1 million "potential voters" who did not exercise their fundamental right at the polls.

"It almost can be said that voters don't determine elections, non-voters do," Garcia said.