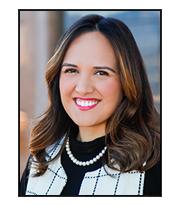 An Arizona native, Ruth Soberanes is an International Trade Specialist at the U.S. Department of Commerce.

Previously, she served as the Director of Trade and Investment at the Greater Phoenix Economic Council. Under this capacity, she provided site selection assistance for international business expansion as well as support for Greater Phoenix-based companies seeking international export markets. Before this, she was the Director of Communications and Strategic Initiatives at the Arizona-Mexico Commission, Office of the Governor. In addition to her experience in government affairs and diplomacy, she has a research background, having served as a Research Analyst and the Communications Manager at the North American Research Partnership where she authored U.S.-Mexico Educational Exchange: Academic Underperformance and a New Diplomatic Opportunity and Human Capital in the U.S.-Mexico Border Region.

Ruth also serves as the Vice President of the University of San Diego Phoenix Torero Club, Board of Director of the Global Chamber and Executive Council Member of the Sandra Day O’Connor Institute Emerging Leaders Network. She’s also a Governor-appointed Board of Director at the Arizona Commission on the Arts and U.S. Secretary of Commerce-appointed member of the Arizona District Export Council. Ruth is an active member of the Flinn Brown Civic Leadership Academy and the Phoenix Committee on Foreign Relations.

In her spare time, Ruth enjoys dancing flamenco and volunteering at the Franciscan Renewal Center.