Does your neighborhood have a guaranteed water supply?

Is ocean desalination the future of drinking water?

Do you know what percentage of Arizona’s water comes from the Colorado River?

Water is a critical issue in Arizona, and a new water-mapping tool created by the Kyl Center for Water Policy at Arizona State University has collected a vast array of maps and data sets to show a wide-ranging view of water in the state.

The Arizona Water Blueprint visualizes information on groundwater, rivers, agricultural irrigation, dams, ocean desalination, critical species and other concepts that are important not only to policymakers but also to any Arizonan concerned about water.

The first-of-its-kind map creates a holistic view of water in Arizona that was missing, according to Sarah Porter, director of the Kyl Center for Water Policy.

“We’re in a lot of meetings about water planning and water resources at various levels, and we often see how this blueprint will make the conversation much more informed,” she said.

Porter and Susan Craig, water policy analyst for the Kyl Center and the project manager, got the idea for the tool after talking to local officials who often need to think regionally about water. One even carried a hand-drawn map around as a visual aid.

So Porter and Craig met with dozens of water, conservation and development experts as well as agency heads to ask what they needed. Then they held 16 design workshops around the state that engaged hundreds of participants.

“In every meeting, we got feedback that made us realize new values and uses that we hadn’t anticipated before,” Porter said.

“It’s important to us that this was really a crowdsourced process.”

The Arizona Water Blueprint got startup funding from SRP, along with help on cartography and videos, and much of the work to put everything together was done by ASU students. 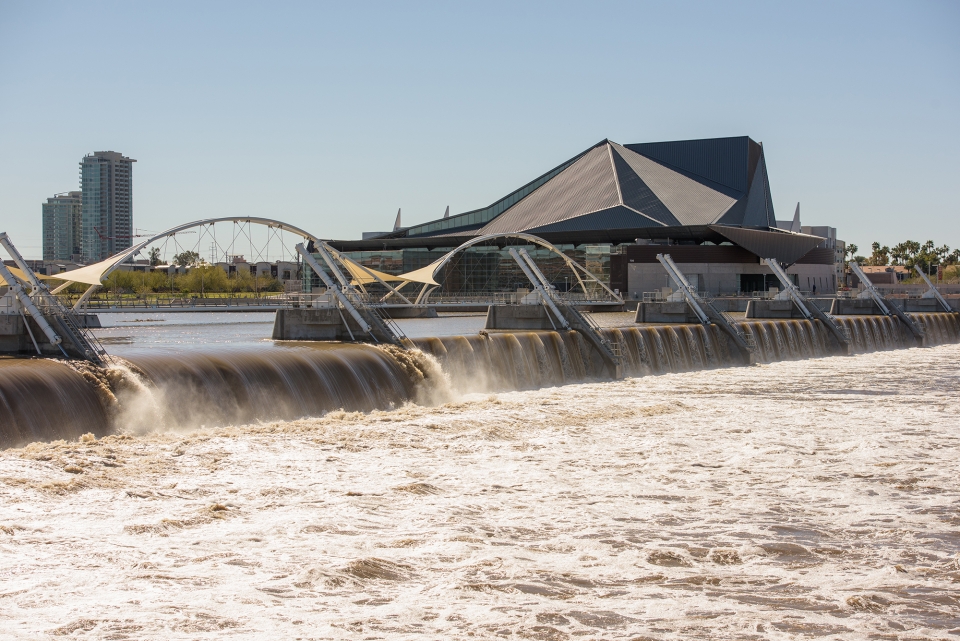 The Arizona Water Blueprint includes 44 maps of water features in Arizona, including dams, like the one at Tempe Town Lake. Photo by Nathan Thrash/ASU

The tool has three main components: A how-to guide with video tutorials, the ArcGIS map and a story map gallery that elaborates on popular topics.

One of the main galleries shows “Arizona’s Water Story,” with history, maps, photos and explanations. An infographic shows that the state’s supply comes from four sources: groundwater, 40%; the Colorado River, 36%; in-state rivers, 21%, and reclaimed water, 3%.

Another story map topic is “water augmentation,” projects that try to move or create more water, such as desalination. Each project explanation describes environmental impacts and lists potential drawbacks.

“Sarah and I always say, “If you’re at any water meeting, ocean desalination always comes up as the next big bucket of water in Arizona,” Craig said.

“There are a lot of augmentation projects being done in Arizona but they come at a price.”

Some of the projects are controversial. One proposal would take groundwater in Yuma, desalinate it, and use some for agricultural irrigation around Yuma and move the rest to Phoenix and Tucson.

“Some of the Yuma people think, ‘Why should Phoenix and Tucson take our groundwater?’” Porter said.

As for ocean desalination, there’s a proposed project near the Sea of Cortez in Sonora, a partnership between the U.S. and Mexico. But the story map reveals that any fresh water generated would be very expensive and the process could damage the environment.

Some of the augmentation projects are on official state lists, but some came from the design workshops. And more projects can always be added.

“If someone says, ‘We want to capture water from air,’ we would run it by our advisory board to make sure we have experts affirming it, and that we should include it,” Porter said.

The Arizona Water Blueprint’s ArcGIS map will not be static. Portions use open-source data that is automatically updated — a big concern voiced at the workshops because many maps are created but become quickly obsolete, Porter said. Each of the 44 map layers of the blueprint will be reviewed annually.

Porter and Craig said that besides the detailed information, the tool is valuable because it was created by a nonpartisan group that has no agenda. The Kyl Center for Water Policy is part of the Morrison Institute for Public Policy. 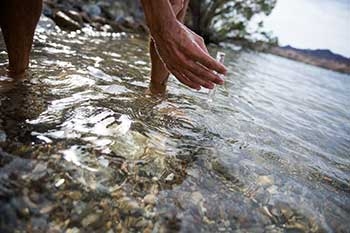 Students who attend ASU's Lake Havasu location can take an ecology lab on the lake. The new Arizona Water Blueprint includes wide-ranging information for policymakers as well as residents concerned about the water supply. Photo by Deanna Dent/ASU Now

The water map launch coincides with the anniversary of Arizona’s 1980 Groundwater Management Act, signed 40 years ago this month. The landmark legislation paved the way for better infrastructure and helped to reduce water consumption in the state.

“The pattern in the state is that something like that happens and for one reason or another we lose sight of it and then we get a new governor and we have a new statewide planning effort,” Porter said. “One of the powerful things we can do with this blueprint is to keep these big steps out there and alive.”

While the tool is helpful for policymakers, residents can also find important information.

“One layer is critical habitats all around Arizona, and you can see the very strong connection between water and threatened and endangered species, especially important bird areas,” Craig said.

Another map layer is “active management areas,” or AMAs.

“Am I in an area where groundwater is aggressively managed or am I in an outlying area where’s there’s not a lot of regulation and there’s a lot of opportunity for a well to go dry?” Craig said.

Arizonans are worried about the water supply. A statewide poll done by the Morrison Institute last year ranked water as the most important policy issue in Arizona, with 80% of respondents agreeing it was important. Less than one-quarter of respondents believed that the state has enough water to meet its needs in the foreseeable future.

“This is an incredibly beautiful project that is a much more vivid way to learn about water than a book with a lot of text.”