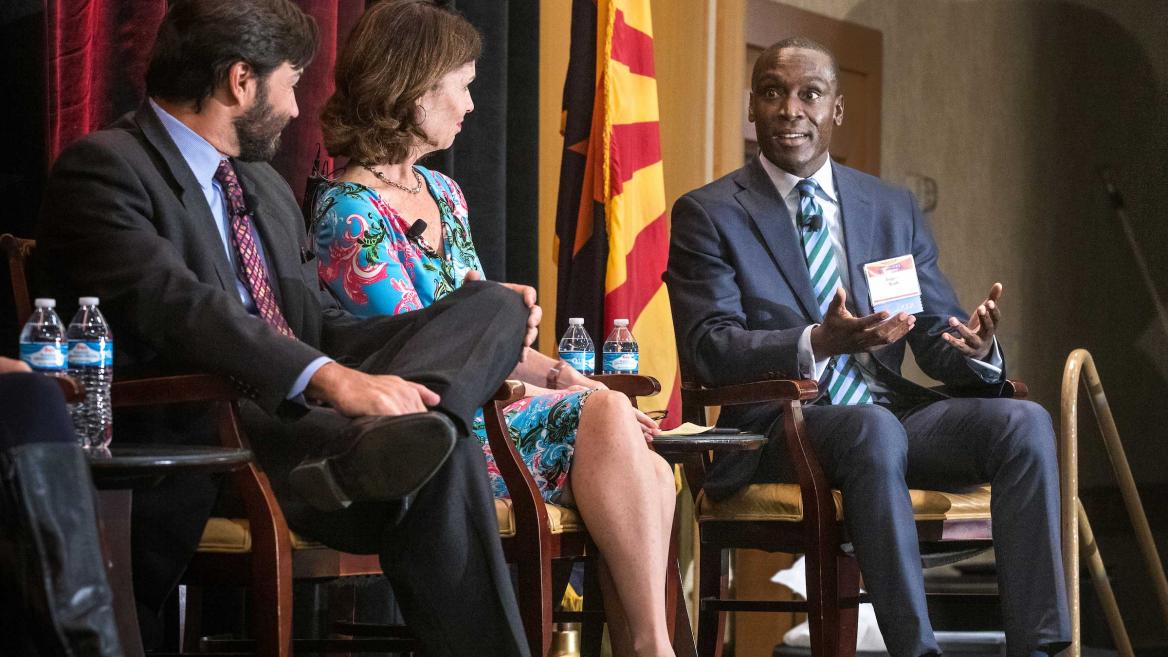 Arizona just had the wettest October on record, but that doesn’t mean the drought is over. Likewise, a 63 percent voter turnout in the midterm election on Nov. 6 doesn’t mean that there isn’t a voter crisis, according to Joseph Garcia, director of communications and community impact for the Morrison Institute for Public Policy.

Garcia presented the report “Arizona’s Voter Crisis” at the State of Our State conference on Monday, sponsored by the Morrison Institute for Public Policy, part of the Watts College of Public Service and Community Solutions at Arizona State University.

“I hear everyone asking, ‘What voter crisis?’" Garcia said of the election turnout.

“We were all happy when we saw that number, and we saw people getting involved. But that 63 percent was the turnout of registered voters.” 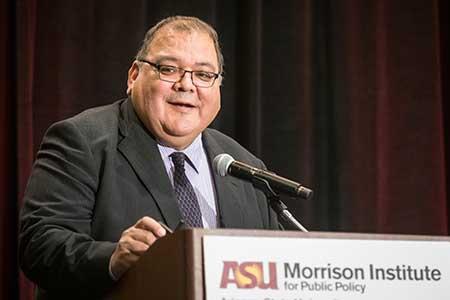 The percentage of people who are eligible to register to vote and actually did vote was 48 percent, he said.

The Morrison Institute report found that minorities, poor people and those with lower educational attainment are the least likely to vote.

“The less educated, poor and nonwhite citizens may feel alienated from the democratic process, and they’re the ones who need representation the most,” said Garcia, who also is the director of the Latino Public Policy Center in the Morrison Center.

“Is it a crisis that we’re at 50 percent of nonparticipation of citizens who can vote but don’t? I would say that as long as we can say, ‘Voters don’t determine elections, nonvoters do,’ I would say that’s a crisis.”

The conference also included panel discussions that gave some perspective to the election results, one statewide and one nationally. Among points were:

On a more 'purple' Arizona:

Janice Palmer, vice president and director of policy, Helios Education Foundation: “Is it a new day for Arizona? I think we’re going back to our roots. We had conservative Democrats, we had Burton Barr. We’re a place that gets things done, and it’s more about the people and less about the team.”

Neil Giuliano, president and CEO, Great Phoenix Leadership: “For 2020, I think we are without a doubt now a swing state. The level of elected officials from both parties will drum up interest.”

Garrett Archer, senior analyst for elections, Arizona secretary of state’s office: “What was most surprising is that you saw voters, especially independents, choosing Ms. (Kyrsten) Sinema at the top of the ticket (for U.S. senator) and reverting to Mr. (Doug) Ducey (for governor) and that began a series of ticket splitting. Maricopa County sent a clear message that, ‘We’re not going to put up with majority red or majority blue. We’re going to split our ticket, and you should too.'"

On a more balanced state Legislature:

Anna Tovar, mayor of Tolleson and former Democratic state legislator: “When I was in the Legislature, I was in the extreme minority. We called ourselves ‘the pizza caucus’ because we could share a pizza. It was hard because we felt our vote wasn’t needed, but I made an effort to make sure I had those relationships across the aisle. With a more balanced Legislature, they will need to work together to pass these issues, and one of them is education.”

Archer: “Republicans have a lot of ground to make up in those swing districts. Going into 2020, what these new legislators have to do, and also maybe the Republicans who will try to take these areas back, is really talk to those specific issues and try to decouple from national things as much as possible. The Ahwatukee-Chandler area, north Phoenix are areas that are very attached to the issues that played well for the Democratic Party. Education was a huge issue.”

On whether the national results were a 'blue wave':

David Byler, chief elections analyst and staff writer for The Weekly Standard: “It’s hard to see it as anything other than a negative verdict on Donald Trump so far. The most credible pushback is that if you think a wave is identified as who gets governing power, then it’s more mixed. If you’re thinking of it in terms of public opinion, it’s a blue wave.”

Eugene Scott, political reporter for The Washington Post: “The most accurate way to answer that is it was definitely not a red wave and that is what Donald Trump said it would be. Especially if you look at state legislatures and when you look at amendments that passed across the country, like in Florida with former inmates being able to receive voting rights again, that were overwhelmingly supported by the left.”

Elvia Diaz, columnist for The Arizona Republic: “What you are seeing is a middle wave. It’s a signal of voters saying, ‘We are done with the blue wave and with the red. We are looking for something else.’ That’s what is most interesting now — this middle ground.”

Jacqueline Salit, president of Independent Voting: “We don’t have a color for independents. It’s not purple because a big part of what it means to be independent is ‘I don’t want to be put into a box.” You can make the case that it was an independent wave.”

Scott: “The turnout from millennials did significantly better compared to previous midterms, and people were anxious about whether millennials would show up. Part of the anxiety is because we still view millennials as 20 years old. I’m 37, the oldest millennial you can be, and most people my age I know are parents, are dealing with housing issues, dealing with debt, dealing with health-care issues, national security. The idea of a disconnected young person who doesn’t know there was an election happening is not an accurate portrayal.”

Jonathan Koppell, dean of the Watts College at ASU: “The election of Donald Trump was deeply energizing for a significant number of students who felt like their vote mattered and saw a guy that nobody thought could be elected president. It excited them. The assumption that all millennials vote a certain way is off. It’s important that their enthusiasm for the process is not contingent on our approval.”

At the conference, Lattie Coor, former president of ASU and chairman and founding director of the Center for the Future of Arizona, received the Sue Clark-Johnson Leadership Award. This is the second year of the award, named for the former publisher of the Arizona Republic and executive director of the Morrison Institute, who died in 2015. 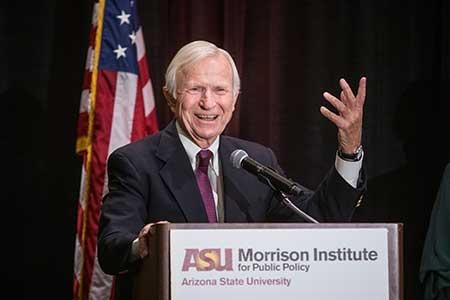 Coor discussed how the center is working to improve education, particularly the Beat the Odds School Leadership Academy for principals, the Move On When Ready college- and career-readiness initiative and a dashboard that shows K-12 progress.

“Our premise is if you have goals, you can work toward something, not away from something,” he said.

ASU President Michael Crow, in opening remarks for the conference, disputed that the country’s political process is in crisis.

“In one single country, France, from 1562 to 1598, 3 million people were killed over whether you were a Catholic or a Protestant,” he said. “No democracy. No way of working things out. No way for people to settle their differences.

“But we have ways to settle our differences and we have ways for every voice to be heard. We don’t burn people at the stake — we argue.”

Crow noted that the democracy is young. 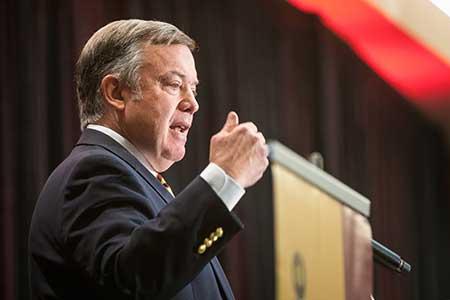 “We’ve just started. Only 2,908 months have passed since the American idea was declared in July 1776,” he said. “I was born 757 months ago. I’ve lived through 25 percent of the life of this republic. This republic is a baby.”

Crow said that he would rate Arizona as somewhere between “very good” and “excellent.”

“In Arizona, we have a shared set of core values,” he said. “Its value system is clear. Its goals are clear.

He argued against negativity.

“I hear all this hyperbole that democracy is going down the tubes and the fate of our republic is at the edge of its demise. These people are fools,” he said.

“We’re not at the end of anything except further progress.”

Top photo: Eugene Scott (right), political reporter for The Washington Post, discussed the national results of the midterm election at the State of Our State conference. At left are Jonathan Koppell, dean of the Watts College of Public Service and Community Solutions, and Jacqueline Salit, president of Independent Voting. Photo by Charlie Leight/ASU Now