What is the ASU CuRVE Project?

The goal of the ASU Colorado River Visualization Enterprise (the "CuRVE Project") is to model the impacts to Arizona of Colorado River climate, hydrologic, and management scenarios. The CuRVE will visualize in an accessible way the potential effects of Colorado River shortages for individual community water systems, agricultural districts, tribal communities and industries across multiple years.

The Kyl Center will be working with ASU’s Decision Theater to create dynamic visualizations to help people analyze and communicate about potential Colorado River scenarios. Decision Theater is a resource that supports and enables research activities through data visualization and predictive modeling.

Read more about the ASU CuRVE Project in ASU News.

Colorado River Shortage: What it Means and What Comes Next

The first component of the ASU CuRVE Project is a Story Map that aims to help people understand and explain the Colorado River shortage. It examines what the shortage means for water conservation, residential water users, groundwater pumping, utility costs, urban growth, new water supplies, and water rights. This Story Map provides a detailed analysis of the shortage and offers interactive maps to help explain which communities face the most significant impacts as a result of the drought and the Colorado River's over-allocation. 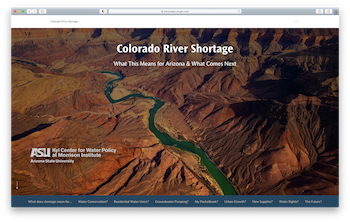 Why do we need ASU CuRVE?

Throughout Western and Central Arizona, people rely on water from the Colorado River to serve drinking water systems, agricultural districts, and industries.

The Colorado River has long been one of the most stressed river systems in the world. It has a legacy of overuse that has worsened in recent decades because of rapid economic development, population growth and ecosystem decline. Now, we’re facing the reality that climate change is a critical threat to the river. Climate change is predicted to cause substantial reductions in the Colorado’s flow — of 25% or more — in the decades to come.

Central Arizona is first in line for cutbacks when a Colorado River shortage is declared, so Arizona water stakeholders must have credible, unbiased research to make important decisions about how water is used.

Right now, the federal government manages the Colorado River under the Drought Contingency Plan. But that plan expires at the end of 2026, which means more negotiations about Colorado River guidelines are on the horizon. The data synthesis and visualizations that the Kyl Center is producing will help all parties who use Colorado River water engage in the negotiation process. The CuRVE project will mean more people can take part in working toward solutions that will help sustain the river in the face of climate change risks.

A few of Arizona’s largest Colorado River water stakeholders have the teams of lawyers, modelers, and technical policy experts necessary to chart a strategy for dealing with the shortage and future drought plan negotiations. Others — including smaller cities and Indian communities, agricultural districts, and many parts of the business community — do not. Like the general public, these stakeholders are mainly reliant on a limited, difficult-to-interpret set of publicly available data when it comes to information about the potential future of the Colorado River. The CuRVE project will help stakeholders with fewer data-interpretation resources fill their knowledge gaps with up-to-date, unbiased information.

Most of the pain of Colorado River shortages will fall on those who are using the water, rather than on those who are entitled to it. Understanding this nuance may help water managers discover additional, innovative ways to lease, trade, and exchange water to mitigate shortage impacts.

This web tool visualizes Central Arizona contract entitlements to Colorado River water and also takes into account long-term leases and exchanges, showing who has access to that water.

Being clear about those entitled to water and those who actually have access to use it can help water policy leaders better frame complex Colorado River shortage issues, which will aid the general public's understanding of how their communities might be impacted. 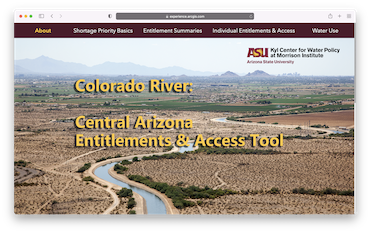 What information is being used to create these visualizations?

The CuRVE Project visualizations will be based on the Bureau of Reclamation’s Colorado River Simulation System. Using this information as a starting point, we will develop an extensive array of Colorado River hydrologic scenarios that show how the river’s flow might change depending upon water demands, management rules, and climate change.

For instance, we propose to visualize the risks of aridification of the river basin and the risks of the demand management decisions of California and Mexico, which have the right to withdraw significant amounts of water from Lake Mead above and beyond their annual allocations.

We’ll be producing a new, flexible, relational database platform that will allow users to quickly manipulate the assumptions underlying various hydrologic scenarios. The relational database will be connected to visualization tools and be accessible to the public through a web-based interface.

Who is involved with this project?

The Kyl Center for Water Policy at the Morrison Institute for Public Policy at Arizona State University is a non-partisan, non-profit think tank that promotes research, analysis, collaboration, and open dialogue to ensure sound water stewardship for Arizona and the West. The Kyl Center’s work advances innovative and cooperative solutions to Arizona’s crucial water management challenges from an interdisciplinary perspective. The Kyl Center believes that the best solutions in water stewardship are built through consensus. We combine objective research with stakeholder engagement to promote system-level changes that foster sound water stewardship.

The Walton Family Foundation and ASU are funding the CuRVE project.