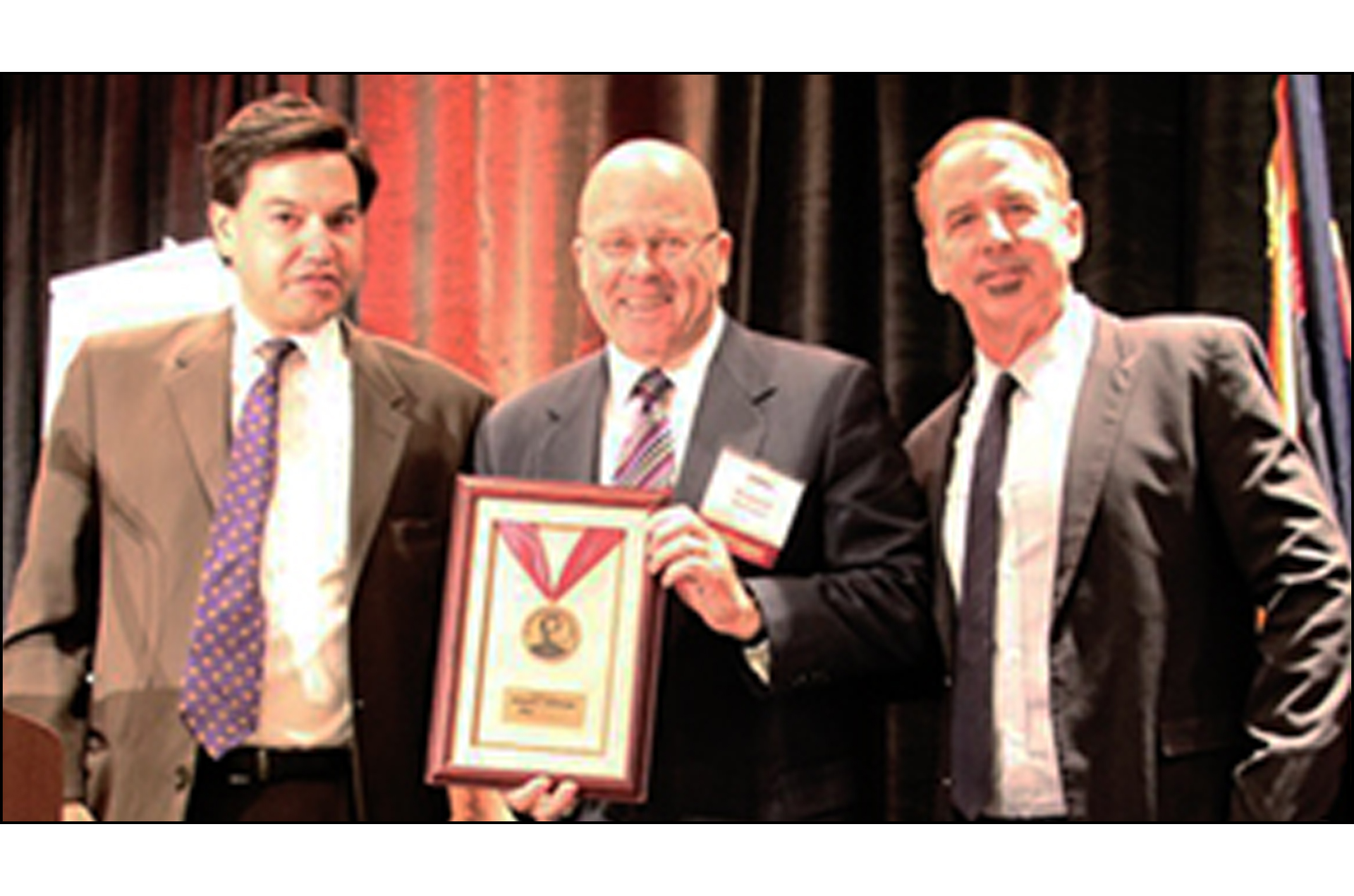 Richard N. Morrison is the first recipient of the Sue Clark-Johnson Leadership Award. He was presented a medal with the likeness of the late former director of Morrison Institute at the 2016 State of Our State Conference in Phoenix on Nov. 16.

The inaugural Sue Clark-Johnson Leadership Award is named after the former late executive director of ASU Morrison Institute for Public Policy. Clark-Johnson retired in 2008 as an accomplished newspaper reporter, editor and executive with Gannett Co., including local publisher of The Arizona Republic and nationally as president of Gannett’s community news division. She forever broke the gender barrier that previously kept many women from newspaper leadership positions. Sue came to Arizona State University in 2009 as executive director of Morrison Institute, further advancing the think tank’s footprint of data- and evidence-based research and analysis through 2013. She passed in January 2015, but her impact can still be felt today via the continual ripples of her leadership, mentorships and many friendships. In fact, the State of Our State Conference – Morrison Institute’s annual signature event – was her creation eight years ago. She saw a need for greater public outreach and a public-policy event where Arizona key issues, problems and opportunities could be examined and discussed in a public forum with key leaders from around the state both on stage and in the audience. The Sue Clark-Johnson Leadership Award bears her image and captures her spirit of boundless energy for making the best of each and every day. As Sue would like to say whenever she would hear a good idea or suggestion: “Now would be a good time.”

As an agriculturalist, lawyer, veteran, priest and member of innumerable boards and commissions, Richard N. Morrison has diligently worked to make things better for his community and his fellow citizens. As Mark McGinnis, a partner at the law firm of Salmon, Lewis & Weldon, says: “Through different phases of his life, one thing has remained constant – his unending devotion to making the world a better place.”

Richard grew up on a 2,500-acre cotton farm in Gilbert, Arizona, where his parents and their business partners owned a 5,000-head feedlot and a 6,000-cow dairy. As son of Marvin Morrison and June Neely Morrison, Richard represents two multigenerational Arizona farming families.

When he was a teenager, his father served as President of the Arizona Farm Bureau Federation and young Richard hoped to earn his respect within the same industry. It didn’t take long, joining Future Farmers of America in high school and eventually becoming state president and national vice president of the FFA. From there, he told one publication, “I think my path was set.”

In 1970, he graduated from Northern Arizona University with honors and finished first in his class with a degree in business. He earned a doctor of jurisprudence from the University of Houston in 1977. He continued farming even after starting his law practice where he became an expert in water law. He served as President of the Gilbert-Mesa-Queen Creek local Farm Bureau during that time. By virtue of that office he also served on the board of the Maricopa County Farm Bureau, which gave him an understanding of what other farmers in the county were doing to meet their own challenges.

Richard earned a master of arts in values from San Francisco Theological Seminary in 1991. Richard began his ordained ministry in 1997 as a vocational deacon, eventually incorporating his skills as a lawyer to work with refugees eligible to apply for asylum. He represented his clients as their pro bono lawyer and arranged for them to receive housing and clothing as necessary. That same year, with a gift from Marvin and June Morrison, the Arizona State University’s Morrison School of Agribusiness and Resource Management was created, and Richard taught water resources management and agricultural law at the School.

Richard was bestowed an honorary degree by the University of Arizona at its 2011 Spring Commencement Ceremony, where he was awarded a Doctor of Humane Letters from the UA College of Agriculture and Life Sciences for his contributions to natural resources leadership, resolution of Indian water rights claims and the management and conservation of natural resources. He and wife, Elaine, were recognized with honorary degrees by NAU in Spring 2015 for their continued commitment to leadership, education and community.

He is co-founder of ASU Morrison Institute for Public Policy, and through the years has been a generous donor to Arizona’s premier think tank. His parents made the 1982 launch of Morrison Institute possible, and his daughter, Julie Morrison, is a current member of its advisory board.

“Morrison Institute sprung up out of community-based discussions,” Richard recalled in an interview. “But Mother and Dad ‘adopted’ it because, when it was first articulated, they were just beginning to get serious about implementing their own program of charitable giving. Both of them readily identified with the idea that an institute could contribute to an improvement in the quality of debate over public-policy issues. Mother and Dad wanted Morrison Institute’s work to be objective. We might assume that everyone has a public-policy agenda, but no one can pursue it with any integrity without objective, thoroughly researched, factual information and analysis. Indeed, without knowing the facts, any public-policy choice is likely to have unanticipated and/or unintended consequences.

“The desire for the best possible research and analysis led to the decision to promote the development of Morrison Institute within ASU. It is important to remember that when Morrison Institute was founded, there was nothing else like it in the whole state.”

The case could be made that there still isn’t anything else like Morrison Institute, with its credible research, analysis and public outreach; its Seven Focal Areas of water, education, governance, changing demographics, economic growth, criminal justice and human services & health; its nonpartisan approach to the state’s challenges and opportunities.

In addition to his service at the Morrison Institute as a longtime advisory board member and past board chairman, Richard served on such boards as the National Advisory Council on Rural Development for the U.S. Department of Agriculture; the Maricopa County Pollution Control Corporation; the American Agricultural Law Association; the American Bar Association; Arizona Town Hall; Claremont School of Theology; Desert Botanical Gardens; Mesa Chamber of Commerce; Baseline Rotary Club of Mesa; Commission of Excellence for Maricopa Community Colleges; and the East Valley Partnership.

Richard has been a catalyst to mobilize others, encouraging individuals and groups to strive towards fulfilling their true potential. Through his many endeavors, however, he never forgot the statewide institute that carries his family name. Recently the Morrison family provided a generous gift to launch the Kyl Center for Water Policy at Morrison Institute. Named after retired U.S. Sen. Jon Kyl, who lends his legal expertise and leadership as a statesman, the Kyl Center seeks consensus for wise water policy and lasting solutions for Arizona.

Thom Reilly, director of Morrison Institute, said it is only fitting that Richard is the first recipient of the Sue Clark-Johnson Leadership Award, given his many contributions to Arizona and his close working relationship with the leader whose likeness is etched on the medallion award.

“There will never be another Sue Clark-Johnson, who in her own right helped ensure Arizona would be a better place for future generations,” Reilly said. “And there will never be another Richard Morrison, whose understated demeanor and humility often allowed his great deeds and contributions to go unrecognized or unheralded. Richard has never been one to draw attention to himself, preferring to credit and praise others. This fact gives us all the more reason to celebrate the lawyer, the farmer, the philanthropist – and, of course, the man, who is a living portrait of servant leadership.”

Richard has played an integral role in Morrison Institute’s mission and integrity for more than three decades. He may have stepped down as board chairman last summer for other matters calling for his attention – including grandchildren and an upcoming business management book– he can look back at a life of leadership and stewardship in public affairs that will continue to impact Arizona today and future generations. As his colleague McGinnis reflected: “That's a pretty good legacy for a person to leave, and I don't think he's done yet.”

But for now and always, Richard Morrison is the first recipient of the Sue Clark-Johnson Leadership Award.